Idol of Goddess Durga of Labony Estate, Salt Lake City, Kolkata, India. In my opinion this is the best of all idols. Of course there will be difference of opinion because some of the idols of some area or Club adorn real Gold ornaments. But this idols not wearing any Gold ornaments but having lot of fine works all around on her, more over the face is divine. 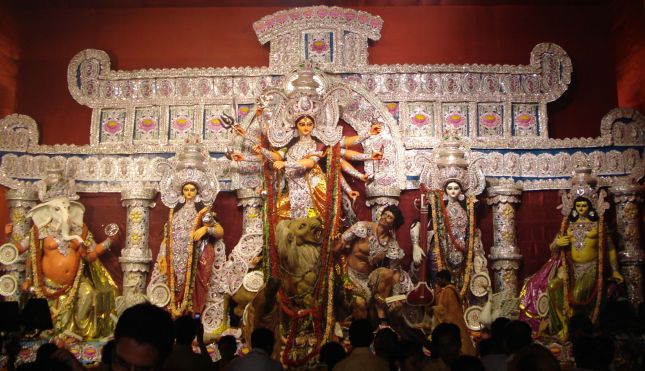 Like every year, this year too Durga Puja is at our doorstep. All around atmoshphere in the nature and everywhere reminds us the festival. Today is Mahalaya. Seven days before Durga Puja, “Mahalaya”, an auspicious occasion, is observed. This auspicious occasion heralds the coming of Maa Durga and begins the festivity to welcome her on this earth. It’s a kind of invitation (or we should say invocation) to the mother goddess to descend on earth and thats why we chant saying – ‘Jago, Maa Jago’. Invocation of Mother Durga is done through the chanting of mantras, singing devotional songs and scriptural verses from “Chandi”. Since early 1930s, the early morning Radio program ”Mahishasura Mardini” of Akashbani Kolkata on the Mahalaya day became a part of Bengali culture and the tradition is still continuing and nothing could change its originality as well as its popularity.

The story line goes like this : due to increasing cruelty of the demon king Mahishasura against the gods, the Gods pleaded Vishnu to annihilate the demon. The Trinity of Brahma, Vishnu and Maheswara (Shiva) come together to create a powerful female form with 10 arms – Maa Durga or Mahamaya, the Mother of the Universe, who embodies the primeval source of all power. The Gods then bestow upon this supreme creation their individual blessings and weapons. Armed like a warrior, the goddess rides a lion to battle with the Mahishasura. After a fierce combat the Durga is able to slay the asura king with her trident. Heaven and earth rejoice at her victory.

Another seven days to go to start the festival.  To read more about the festival, please go to my another post named : Durga Puja

Wish you a happy Durga Puja

Goddess Durga or Maa Durga is worshiped in many forms. (Read my blog on Durga puja for details). Sometimes idols are made based on  the theme. In fact the Durga puja in Kolkata has gradually shifted towards competitions of artistic creativity and every puja committee tries to exhibit their  creativity on Goddess Durga as well as on the Pandals (It is the place,where the idol is placed). So alongwith the puja, we just experience different kinds of beautiful creativities, arts and art forms during 4 days of Durga puja. The  beautiful pandal below, is made of wood, bamboo,straw and cloths. It has successfully depicted  a temple with wonderful lightings to create a true ambiance of a temple or a place of worship. There are arts works on the walls and pillers which are not visible in the photograph. This type of creative works with so much perfection are not seen in any part of India.

Since time immemorial Goddess Durga  has been worshipped as the supreme power. The word “Durga” in Sanskrit means a fort, or a place which is difficult to overrun. Another meaning of “Durga” is “Durgatinashini,” which literally translates into “the one who eliminates sufferings.” Thus, as per Hindu believe goddess Durga protects her devotees from the evils of the world and at the same time removes their miseries.

There are many incarnations of Durga, some of them are – Kali,  Bhavani, Ambika, Gauri, Rajeswari, etc.. Durga incarnated as the united power of all divine beings, who offered her the required physical attributes and weapons to kill the demon “Mahishasur”. She killed the demon Mahishasur and thats why she is also known as Mahishasurmardini.