Vijayadasami (Sanskrit: विजयदशमी) also known as Dussehra (Sanskrit: दशहरा) an important Hindu  festival celebrated in a variety of ways in India and abroad. Dasha Hara is a Sanskrit word which means removal of the following ten bad qualities (evils) within you: 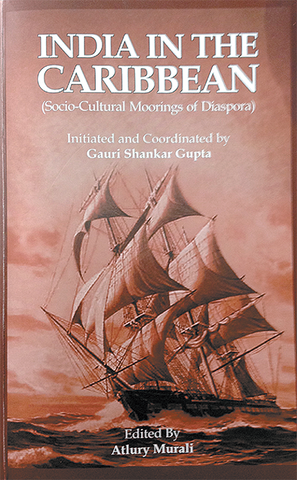 India in Caribbean (subtitled Socio-Cultural Moorings of Diaspora), a collection of essays produced at the behest of Gauri Shankar Gupta, the Indian High Commissioner to T&T, is a most intriguing and valuable miscellany.

It consists of 24 articles, ranging in style and content from journalism to academic essays, to a few pieces in-between, and reflections and brief interpolations from a variety of people on the Indian experience, mainly in Trinidad, but also in region.

Unusually for a collection of this nature, the work is not unified thematically, or reconciled by an editor’s introduction. The points of view and topics in various articles diverge and disagree, which is not a bad thing or even anomalous for such books, but one expects an editorial coherence of perspective even amongst divergent viewpoints.

The first three essays written by Indian scholars (not Indo-Caribbeans) reflect an almost militant insistence on the coercive nature of indentureship and the oppressive, traumatising character of the past and even contemporary Indo-Caribbean experience.

HC Gupta calls Indenture an “unfortunate saga” wherein “more than half-a-million Indians were lured under false promises and were transported under the most primitive conditions to the Caribbean Islands.” He invokes the pains of the third and fourth generation Indians in, for example, being ashamed of Indian food and dress.

Altury Murali, a visiting professor at UWI from the University of Hyderabad (who edited the collection) follows a similar line, proposing that the “argument that East Indians ‘willingly’ and ‘by choice’ stayed back in Trinidad seems far from reality.” Kapil Kumar (Director of the Indira Gandhi Centre for Freedom Struggle Studies and Chair of the Faculty of History at Indira Gandhi National Open University), also proposes that indenture was used (among other things) as a means to transport Indian rebels from the 1857 Rebellion.

He writes that the system was fraught with “unscrupulous methods and allurements to recruit labour with false promises.”

Kumar cites a few Trinidadian and other scholars who propose otherwise, and dismisses them, but neglects by far the most detailed exploration of the character of recruitment and the treatment of indentured labourers. This was done by KO Laurence in his magisterial and exhaustively-researched study, A Question of Labour, which is cited in other contributors in this book.

This seeming theme of disconnection in this volume among its contributors and with other books exploring the same topic(s) is an issue of which more will be said later. It’s worth digressing to point out that the notions of deceiving and coercing Indians into coming here, and colonial apathy to their living conditions, are contestable.

No fewer than four missions were sent to examine the system of indenture, the last being James McNeil and Chimman Lal’s in the early 20th century, whose reports were acted upon. In this volume, Brinsley Samaroo’s essay on the “girmityas” (contract signers) notes: “they were smart enough to know that they were going abroad to do agricultural labour and as indenture progressed, the returning labourers informed the home people about the requirements of the New World.”

Kusha Haraksingh’s essay points to the use of this narrative of indentured Indians as unwilling emigrants with divided loyalties to bolster the conception of Indians as transients and non-citizens when evidence, as in the extensive long-term investments and acquisitions they made, indicated the opposite.

The Indian historians’ underlining the themes of oppression and colonial deceit reveal an interesting perspective on the way Indenture is being “written” or “re-written” by Indian historians and historiography, and its convergences and divergences with the work and ideas of Caribbean historians of Indian origin. This itself a fascinating study waiting to be undertaken.

But the outside perspectives also observe things insiders might miss. A good example is in Murali’s essay, which translates the lyrics of a song from an old Indian movie: “The bird in the cage no one knows your pain/You are silent from outside/you weep inside, oh, bird, you weep inside/Nobody knows your pain.” To anyone who has lived in an Indian village in Trinidad, these few lines provide a stunning flash of insight into the pathos of IndoTrinidadian existence which has been insufficiently explored.

Subtleties aside, in the bigger frame of reference themes and tropes of oppression and cultural erasure suffuse the Indo-Caribbean writers’ and scholars’ works as well, sometimes to great effect. Haraksingh’s essay Trouble in the Kutiya is such a subtle work, which examines the “layers of meaning generally obscured by problems arising from the nature of evidence” which meant the “exogenous reconstruction of experience producing not only a concentration of stereotypes, but substituting what others thought of Indians as the history of Indians.”

But oppression constitutes only one strand of the many knowledges the book rather haphazardly assembles.

Other overlapping topics include historian Sherry Ann Singh’s examination of The Yagna In Trinidad Hinduism, psychoanalyst Sandhil Maharaj Ramdial’s exploration of The Psychological Reverence of the Ramayan for Trinidad Hindus, and Primnath Gooptar’s Memory, Indian Film and the Creation of Indian Identity in Trinidad.

These constitute more interesting inquiries into identity and the psycho-social construction of Indo-Trinidad, which, as this volume shows, are more extensive, complex, and real than the Creole nationalist mythology, and many Indo Caribbeans, know or acknowledge.

Two other interesting and comprehensive articles (which underline the lack of editorial coherence) are Aakeil Murray’s Pentecostal Attempts to Proselytise to the Indian Community in Trinidad 1950-1990, and Visham Bhimull’s The Journey of Modern Standard Hindi from Indentureship to Present.

Outside of academic essays are shorter articles examining politics, broadcasting, music, and culture generally, which vary in quality. Rampersad Parasram examines the formation of the UNC (The House of the Rising Sun); but (he, like the volume) neglects the broader history of Indo politics even from Independence—giving it a few paragraphs.

This is all to say that there’s more good than bad in terms of content, but the book’s aforementioned editorial/epistemic disorderliness is its major problem, and its editing/proofreading is a minor one. In the first place, in its stated intention to provide a look at the “socio-cultural moorings of (the) Diaspora” this book does not acknowledge the other significant attempts to do the same thing.

There have been Across the Dark Waters, edited by David Dabydeen and Brinsley Samaroo; From Calcutta to Caroni edited by John La Guerre, which has gone through three revised editions; another volume titled India in the Caribbean also edited by Dabydeen and Samaroo (published by Hansib), and The Construction of an Indo Caribbean Diaspora, edited by Samaroo and Sherry Ann Singh.

These are recent works; there is also a significant amount of the pre- and post-Independence work done by the Niehoffs, Yogendra Malick, Morton Klass, Vera Rubin, Colin Clarke, Steven Vertovec, Aisha Khan, and others.

The failure to acknowledge and integrate the previous knowledge is disruptive of continuity with previous scholarship, and leads to a sense of recurring reinvention of the wheel in this area of study. Also, many of the articles are cursory, which an editor should have grouped accordingly or rejected. The proofreading errors, while not overwhelming, affect the reading.
All these issues aside, India in the Caribbean (Socio-Cultural Moorings of Diaspora) is a useful, valuable collection. It opens many lines of inquiry into the contemporary Indo-Caribbean experience, provides insights, and asks questions which it is hoped these will be taken up by working scholars. The book was launched at the Nalis AV Room in Port-of-Spain on August 11.

India in the Caribbean: Socio-Cultural Moorings of Diaspora
Edited by Altury Murali
Published by the High Commission of India, Port-of-Spain

For the original report go to : http://www.guardian.co.tt/lifestyle/2015-10-20/valuable-look-indo-caribbean-culture

The Indian diaspora in the Caribbean is one of the most vibrant across the globe, says India’s Minister for External Affairs and Overseas Indian Affairs, Sushma Swaraj, in a just published book titled, “India In The Caribbean”.

The book was initiated and coordinated by Indian High Commissioner to Trinidad and Tobago Gauri Shankar Gupta and edited by Atlury Murali.

“Though numbering less than two million across the Caribbean islands, they (Indians) occupy a position of considerable power and influence. They have produced some of the best artists, writers, spiritual leaders, political thinkers, doctors, lawyers, scientists and sportsmen. Indian festivities including Diwali, Holi, Maha Shiva(Rathri) and Ram Navami are celebrated with traditional fervour and gaiety. Indian films and music are as popular as they are in India,” Sushma Swaraj said in a message in the book.

“I, therefore, take this opportunity to pay tribute to the sagacity, fortitude and courage of these valiant people far away from India.”

Former T&T Foreign Minister Winston Dookeran, in a message, said that as with other diasporas, the Indian community does have an affinity with the home country.

“That affinity was kept alive by films, letters and the ties of kinship. The earlier generations understandably were nostalgic. Globalization today, however, is triumphant. With growing convergence among nations and states, nostalgia will recede and some memories lost. While not losing their heritage, the Indian community is first and foremost part and parcel of the citizenry of Trinidad and Tobago,” Dookeran noted.

He said that the journey was long, at times arduous and difficult but always inspiring, in discovering a new Caribbean identity.

Indian High Commissioner Gupta, in the foreword, noted that relations between India and Trinidad and Tobago are deeply rooted in history and culture, though their initial history has been painful and brutal.

“During the colonial era, after abolition of slavery in 1833, the British faced extreme shortage of labour for sugar plantation in their sugar producing colonies of the Caribbean. To overcome this problem, over half a million Indians were transported to the region as indentured workers (often called as Indian coolies) with false hopes and promises. Most of these workers came from (what is now) Eastern Uttar Pradesh and Western Bihar, while a smaller number came from (what is now) Andhra Pradesh and Tamil Nadu. Many of them even died on the way during the long voyage,” Gupta added.

“India In The Caribbean” is a classic presentation, away from the routine issues such as cramped huts, and singles out some of the achievements of the Indian diaspora today which are both educational and forward-looking, thus ensuring a firm place in the overall scheme of challenges which they faced earlier on in their sojourn to Trinidad and Tobago and by extension the Caribbean.

In its 275 pages, the book, which was edited and published by India Empire Publications, India, carries articles like “Customs and Traditions of East Indians in Trinidad and Tobago”, “From Girmityas to Nation-builders: the Indo-Caribbean Experience”, “Role and Evolution of Broadcasting”, “Memory. Indian Films and the Creation of Indian Identity in Trinidad”, “Challenges to Tracing Roots in Trinidad”, and “Culture and Traditional Way of Life”, among the 24 on offer. Each one of the contributions is stimulating, refreshing and thought-provoking – enhanced by in-depth bibliographies and researches.

“India In The Caribbean” is worth reading by all, irrespective of religious, cultural, geographic or ethnic orientations as it gives an eventful insight of the Indian diaspora which has a few years short of 200 years on this side of the Atlantic.