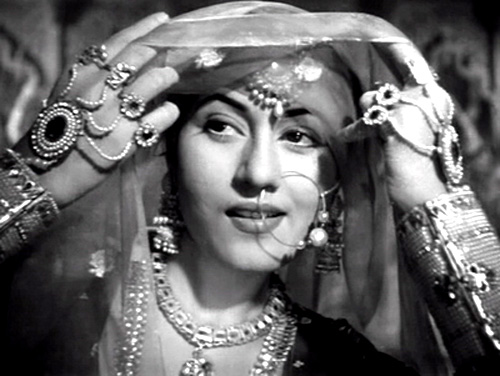 It was Madhubala on whom Lata Mangeshkar’s Ayega Aanewala was picturised in the movie Mahal.

Indian music includes multiple varieties of folk, popular, pop, and classical music. India’s classical music tradition, including Carnatic and Hindustani music, has a history spanning millennia and, developed over several eras, remains fundamental to the lives of Indians today as sources of religious inspiration, cultural expression and pure entertainment. India is made up of several dozen ethnic groups, speaking their own languages and dialects, having very distinct cultural traditions.

India is the largest film producing country in the world. It produces around 1,000 films in 27 official languages. Every film contains five to six songs which are based either on classical Indian music or light music.

Renowned singer Mohammad Rafi, once said to reporters: “You listen to my songs. I listen only to Manna Dey’s songs”.  According to musicians SD Burman and Anil Biswas, Manna Dey could sing any song of Mohammad Rafi, Kishore Kumar, Mukesh and Talat Mehmood.

Raja Harishchandra (1913) , by dadasaheb Phalke. Was the first silent feature film made in India. By the 1930s, the industry was producing over 200 films per annum. The first Indian sound film (Talkie) was Ardeshir Irani’s Alam Ara, made in 1931, which was a major commercial success. There was clearly a huge market for talkies and musicals; Bollywood and all the regional film industries quickly switched over to Talkies.

In 1937, Ardeshir Irani of Alam Ara fame made the first colour film in Hindi, Kishan Kanya. The next year in 1938, he made another colour film, Mother India. At this time, lavish romantic musicals and melodramas were the staple fare at the cinema. Successful actors included Dev Anand, Dilip Kumar, And Raj Kapoor and actresses like Nargis, Meena Kumari, Nutan and

In the late 1960s and early 1970s, romance movies and action films starred actors like Rajesh Khanna, Dharmendra. In the mid-1970s, romantic confections made way for gritty, violent films about gangsters and bandits. Amitabh Bachchan, the star known for his “angry young man” roles, rode the crest of this trend with actors like Mithun Chakraborty andAnil Kapoor, which lasted into the early 1990s. Actresses from this era included Hema Malini, Jaya and Rekha.

Once Satyajit Ray said about Jayaprada that she is one of the most beautiful actresses of Indian Cinema…. . In my opinion it was true at that time and I too rated her in the same words. .

If I do not mention about the Bengali Cinema, the article will be incomplete and it won’t give a full picture of Indian Cinema, because many talents from Bengal, contributed a lot in Bollywood for the Indian Cinema and its developments to the world class of today.

The first Bengali movie “Billwamangal” was made in 1919 and it was happened to be a silent movie like Raja Harishchandra in Hindi. Bankim Chandra was a popular Bengali novelist whose several works were adapted in films, like, Durgeshnandini, Krishnakanter Will etc. The first popular hero in Bengali film was probably Pramathesh Barua, who was a director too. Debaki Bose, Pramathesh Barua gave a new dimension to Indian cinema. Since then the Bengali film industry produced various talented directors, actors, singers, composers, musicians and many more. In fact those days many talents devoted their lives and creativities to nourish the Bengali culture in celluloid form and established milestones in history of Indian Cinema in Bollywood as well as Bangla Cinema in Kolkata.

Suchitra Sen & Uttam Kumar, the legends of Bangla cinema, were the best romantic pair. They will never be replaced, nor anybody will dare to replace in the next millenium

Whenever we talk about Bengali Cinema, the name of Satyajit Ray has to come for his contributions to Bengali Cinema. His first feature film was “Pather Panchali” (The song of the Road). This film was his most notable one for its realistic portrayal and artistic composition of his camera work that earned him worldwide recognition. He received many prestigious International and National awards for creation of his master pieces. He made 28 full length feature films and a few documentaries. His some of famous films are Pather Panchali, Aparajito, Apur Sansar, Charulata, Goppi Gayen Bagha Bayen, Satranj Ke Khiladi (in Hindi), Sadgati (Telefilm), Nayak, Chidiyakhana, seemabaddha and Aagantuk.

The French Government awarded him “The Legion of Honour” the highest award of France. He also received many awards like the Magasaysay award (1967) and Dada Saheb Phalke award (1984). He was awarded “Bharat Ratna” in 1992. But the happiest moment in his life came when he was informed in his death bed of winning the special Oscar Award.

In the opinion of many, Satyajit Ray was the greatest filmmaker in the latter half of the 20th century.

Listen some of nostalgic Bengali songs from the old cinemas  with the help of my youtube channel : Click here.