City of Joy is a 1985 novel by Dominique Lapierre based on a story of the city of Calcutta. It was adapted into film by Roland Joffé in 1992. Calcutta (now Kolkata) is nicknamed as the “City of Joy” after this novel and the film based on this novel.. I am not trying to write a review of the film or the novel. I am just trying to look back and share the brief history of the city and lets see how it grew up from a remote village to today’s metro.

Besides calling it “City of Joy” Kolkata (formerly Calcutta) is also known as the city of Rabindranath Tagore, city of Satyajit Ray, city of Mother Teresa, city of intellectuals, city of football, city of procession, city of political movements, city of Bundhs (strike) , city of arts and culture (cultural capital of India), city of festivals and at last but not the least it is also known as city of best sweets and cuisine. Kolkata is the Capital of the Indian state of “West Bengal”. It is the 4th largest city in India. 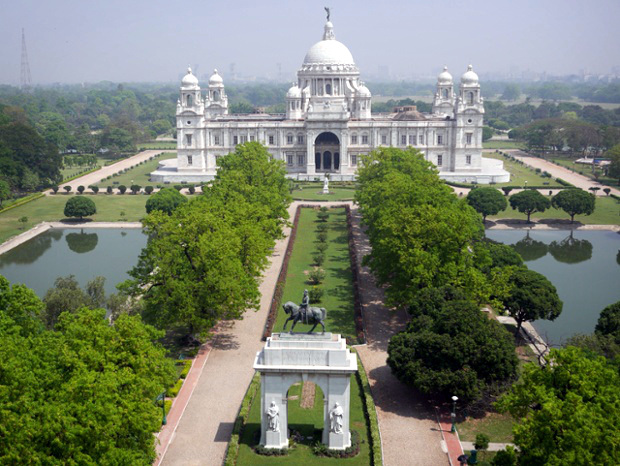 Victoria Memorial, the land mark monument of Kolkata. A beautiful memorial in honour of Queen Victoria of England, was constructed at a cost of Rs. One crore and five lakhs and opened to public in the year 1921. Lord Curzon, then Viceroy of India, wanted that the most suitable memorial would be a “stately”, spacious, monumental and grand building surrounded by an exquisite garden. The memorial is not less in any manner than what he thought. It is surrounded by sprawling lawns, exquisite gardens, fountains.

One of the Ghats (bathing place) on Holy river Hoogly (part of Ganges) where people take bath in the Holy water of Ganges regularly . Photograph : Copyright © Anil C. Mandal, all rights reserved.

BRIEF HISTORY OF THE CITY : Kolkata’s recorded history began in 1690 with the arrival of the English East India Company, which was consolidating its trade business in Bengal.  In 1690, Job Charnok, an agent of the East India Company landed on the eastern bank of river Hoogly for British trade settlement and he purchased the three large villages along the eastern bank of Hoogly namely Sutanuti, Gobindapur & Kalikata. Kalikata was a fishing village; whereas Sutanuti was a riverside weavers’ village. They were part of an estate belonging to the Mughal emperor; the jagirdari (a land grant bestowed by a king on his noblemen) taxation rights to the villages were held by the Sabarna Roy Choudhury family of landowners (zamindars). These rights were transferred to the East India Company in 1698. [Job Charnock, an administrator who worked for the Company, is traditionally credited as the founder of the city; in response to a public petition, the Calcutta High Court ruled in 2003 that the city does not have a founder.]

FORT WILLIAM : In 1712, the British completed the construction of Fort William, located on the east bank of the Hooghly River to protect their trading factory. Facing frequent skirmishes with French forces, the British began to upgrade their fortifications in 1756. The Nawab of Bengal, Siraj ud-Daulah, protested the militarization and tax evasion by the company. His warning went unheeded, and the Nawab attacked; he captured Fort William and instigated the killings of several British prisoners of war in the Fort. In the following year the British troops recaptured the Fort.

East India company was appointed imperial tax collector of the Mughal emperor in the province of Bengal, Bihar and Orissa, while Mughal-appointed Nawabs continued to rule the province. Declared a presidency city, Calcutta became the headquarters of the East India Company by 1772. In 1793, ruling power of the Nawabs were abolished and East India company took complete control of the city and the province.
Political activities and disadvantageous location of Calcutta prompted British to move the capital to New Delhi in 1911. 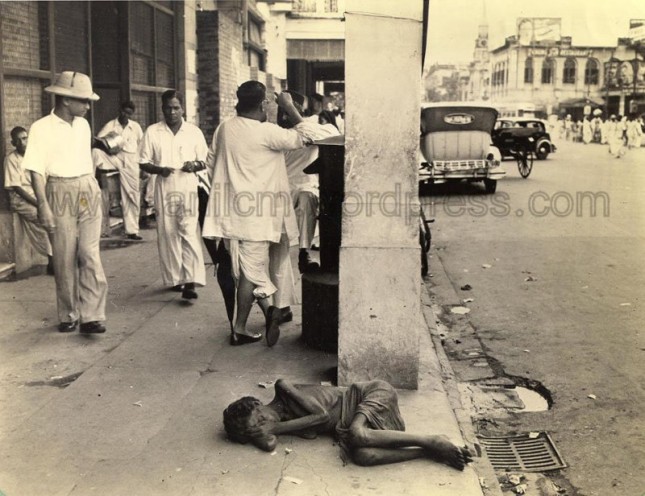 BENGAL FEMINE : The city and its port were bombed several times by the Japanese between 1942 and 1944, during World War-II. Coinciding with the war, millions starved to death during the Bengal famine of 1943 due to a combination of military, administrative, and natural factors.

PARTITION OF INDIA : Demands for the creation of a Muslim state led in 1946 to an episode of communal violence that killed over 4,000. The partition of India led to further clashes and a demographic shift—many Muslims left for East Pakistan, while hundreds of thousands of Hindus fled into the city from East Pakistan (Now Bangladesh).

Once the city Calcutta was center of modern education, science, culture and political movements in India. The Bengal as a whole was much developed those days in all sectors including politics, which gave birth of a proverb – “what Bengal thinks today, India thinks tomorrow”.

Copyright © Anil C Mandal, all rights reserved. Ferry over the River Hoogly (Part of River Ganges) at Belur. On the backgroung the Belur Muth is seen. 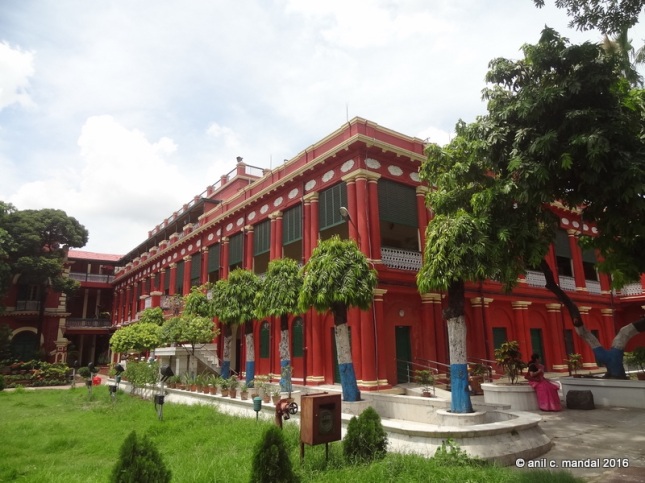 Jorasanko Thakurbari, Rabindranath Tagore’s ancestral house in  Jorasanko, north of Kolkata, West Bengal, India is now  a museum dedicated to the life and works of the Nobel laureate poet Rabindranath Tagore. This palatial building was built in the 18th Century by his Grand father Prince Dwarkanath Tagore. It is the house in which the great poet, Rabindranath Tagore was born. It is also the place where he spent most of his childhood and died on 7 August 1941.

Maharshi Bhawan, named after poet’s father Maharshi Debendranath Tagore, is a museum named “Rabindra Bharati Museum” under the Rabindra Bharati University, that has galleries dedicated to Tagore, members of the family and the Bengal Renaissance. The Galleries provide glimpses of intimate family photographs, portraits and Tagore’s evolution as a poet & philosopher.  The house has been restored and well maintained to reflect the way the household looked when the Tagore family lived in it and currently serves as the Tagore museum for Kolkata. 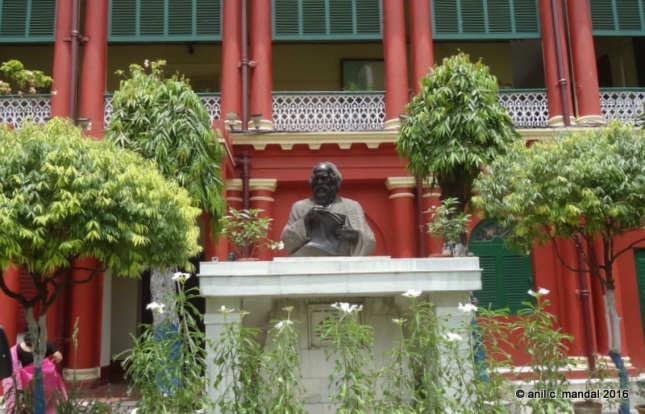 Most intellectual city of India: Most Nobel laureates of India have been associated with Calcutta University or Calcutta at some point of time. The city has produced six Nobel Laureates so far. They are:

Calcutta to Kolkata : In 2001, the name of Calcutta was changed to Kolkata. The names Kolkata and Calcutta were probably derived from Kalikata, the name of one of the three villages (Kalikata, Sutanati & Gobindapur). While the city was always pronounced either “Kolkata” or “Kolikata”, in Bengali, its official English name was only changed from “Calcutta” to “Kolkata” in 2001, reflecting the Bengali pronunciation and to end the legacy of the British. 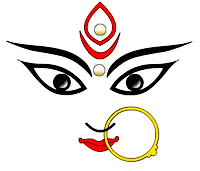 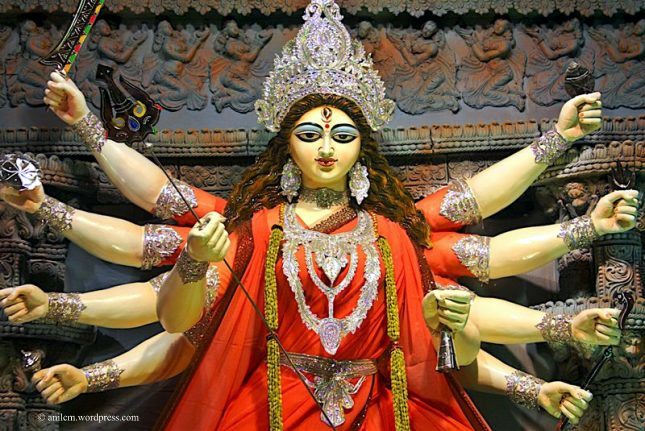 Festivals : There is a proverb in Bengali  ” বারো মাসে তের পার্বন“ (Baro Maase tero Paarban), which means in twelve months, thirteen festivals. Durga Puja is the most notable festival of Bengalis which celebrated every year like a carnival. It’s a religious and social festival of Kolkata. Other notable festivals include Deepavali, Eid, Christmas, Holi, Poila Baishakh (Bengali new Year), Saraswati Puja, Rath Yatra. Among the cultural festivals “Kolkata Book Fair” is the most popular and its now a yearly event which takes place in the month of January every year.

Indulgence to foods & sweets: As already mentioned about Kolkata that it is a city of best sweets and cuisines. Food and sweet are the two greatest indulgence of Kolkata people. Kolkatans love to eat and also they re great hosts. Every meal, ends with choicest sweets and Misty doi (sweetened curd). The unique range, quality, taste, variety and cheap rates of sweets can leave you amazed. The kolkata sweets are best sweets in India and unparallel in quality. Misty doi (sweetened curd) and confectionery of Patali Gur (date palm jaggery) are two delicacies of Bengal. 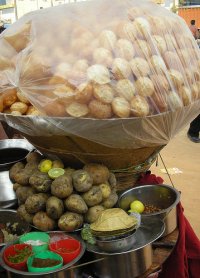 Besides Mughlai (tandoori, kebabs, biriyani etc.) Continental, Thai, Tibetian cuisines, Chinese cuisines are also very popular in Kolkata. Authentic quality Chinese cuisine is available in the eating houses/ Restaurants in Old China Town run by the Chinese people. Kolkata is also having varieties of quality foods on the streets. These foods are cheaper and there are some reputed points in the Dalhousie and Esplanade area. These points are only open during day time for the office goers and visitors to the city. We can proudly say that this kind quality foods are not available out side this city. Non-Indian food outlets like KFC, Macdonalds are present in the city. Junk foods are too available in every corner of the city. The Phuchka of Kolkata (Pani Puri in Bombay, Gol gappe in Delhi) is the best and nowhere this quality of Pani puri is available in India. 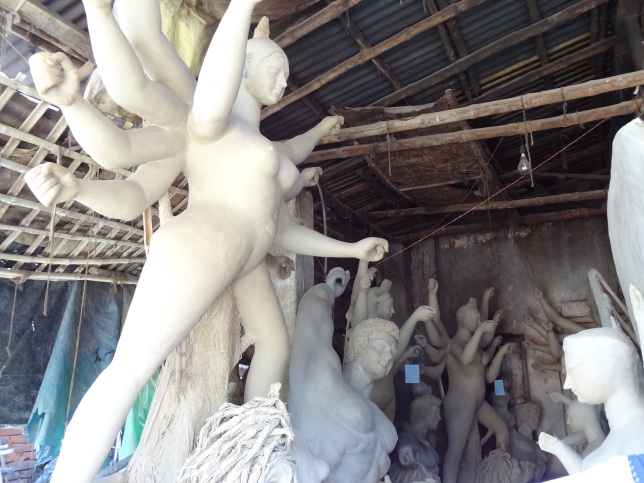 Making of Idols at Kumartuli 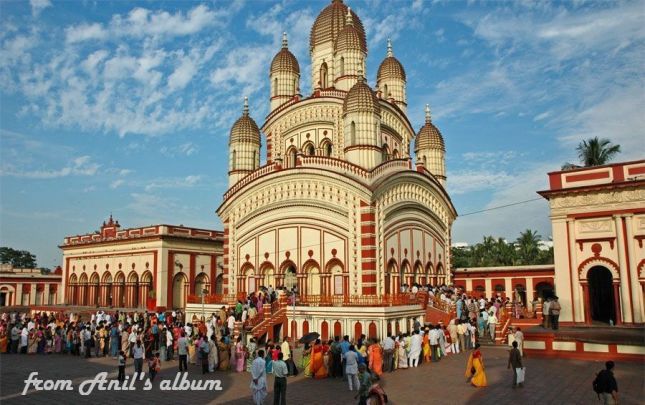 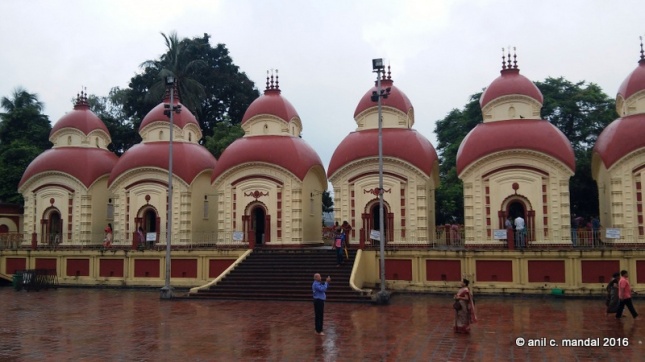 The temple compound, apart from the main Kali (Maa Bhabatarini) temple, contains a large courtyard surrounding the temple, with rooms along the boundary walls. There are twelve Shiva temples (Shiva being the Kali’s companion) along the riverfront. 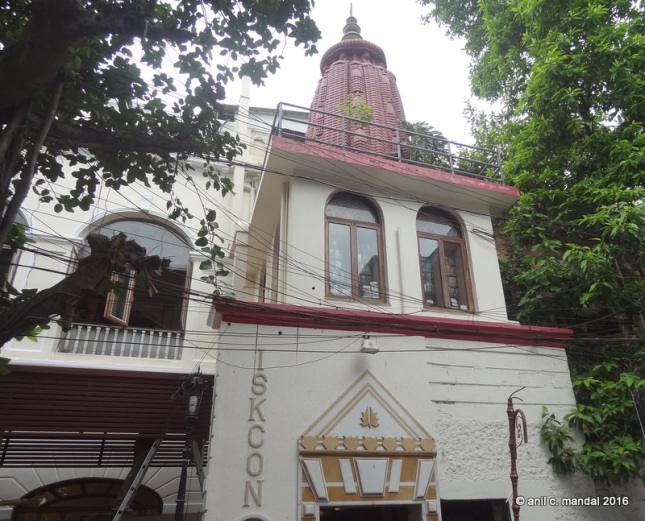 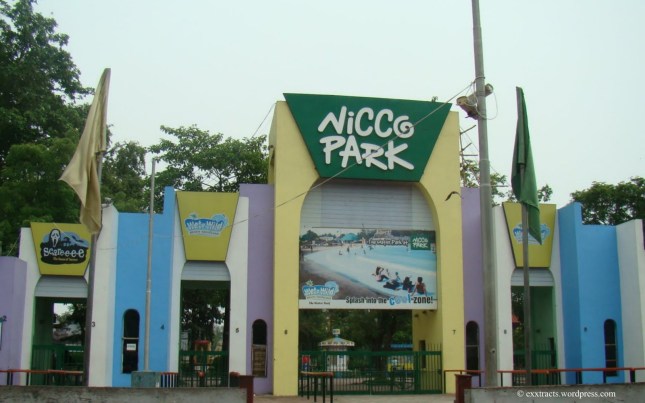 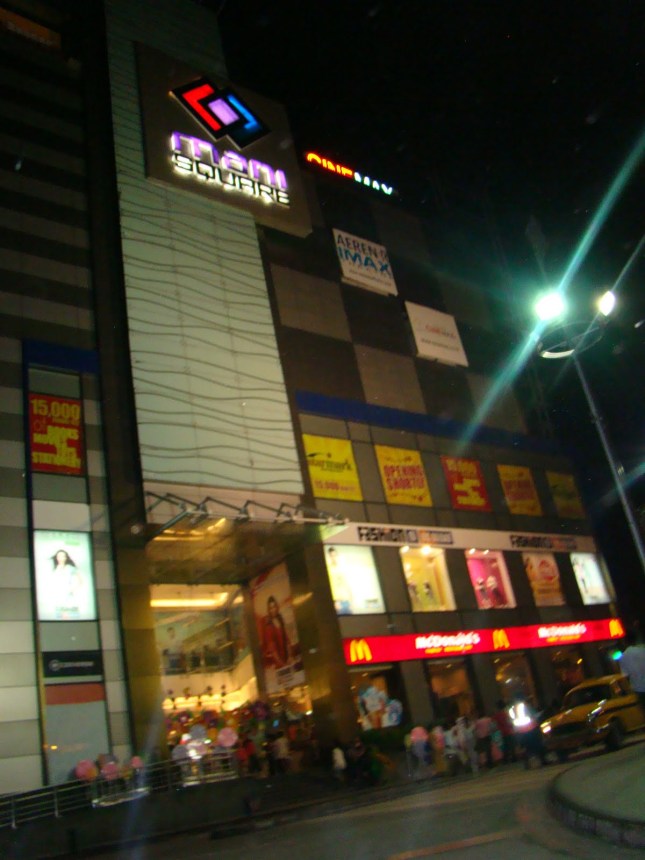 One of the Malls of Kolkata 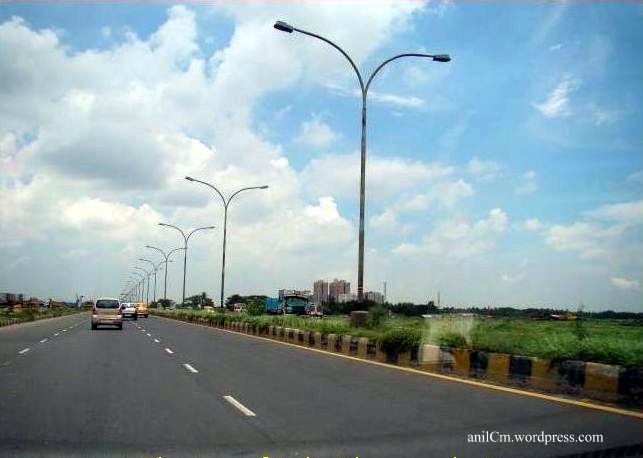