The festival of Durga Puja at Kolkata appears to be a remarkable tradition. Durga puja as used to commemorate by the aristocrat families and Zamindars of ancient Calcutta relates the history and foundation of Kolkata. In this post, tried to show a glimpse of the century old Durga Puja celebrations of the aristocrat and Zamindar families of Kolkata. 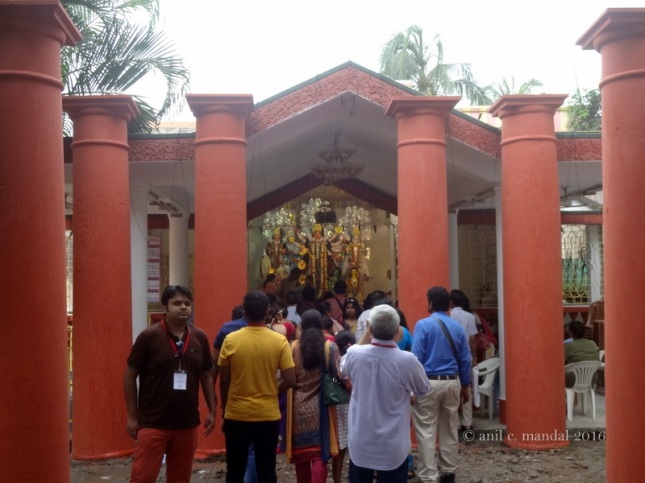 SABARNA RAYCHOUDHURY OF BARISHA : Family Puja of Sabarna Roychaudhury, the Founder of Calcutta. Today the ” Aatchala Bari” still remains. It was built by Laksmikanta Gangopadhyay and Durga Puja started by him in the year 1610. Therefore this Puja is more than 400 years old and still continuing to celebrate by the descendants of the family. 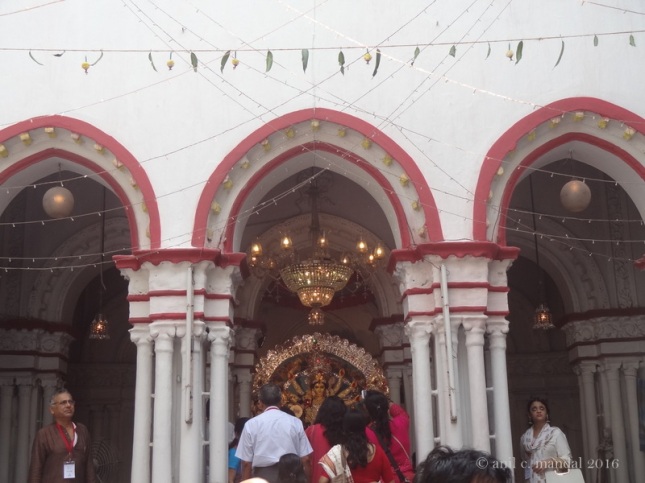 RANI RASHMONI OF JANBAZAR : Rani Rashmoni ( রানি রাসমণি, 1793—1861 ), after her marriage to Babu Rajachandra Das, Jamindar of Janbazar, she continued the tradition of celebrating Durga Puja  at her house at Janbazar. Rani Rashmoni’s House at Janbazar was venue of traditional Durga Puja celebration each autumn. This included traditional pomp, including all-night Jatra (folk theatre) and Kabi gaan. Maharshi Debendranath Tagore used to visit this house during Durga Puja. 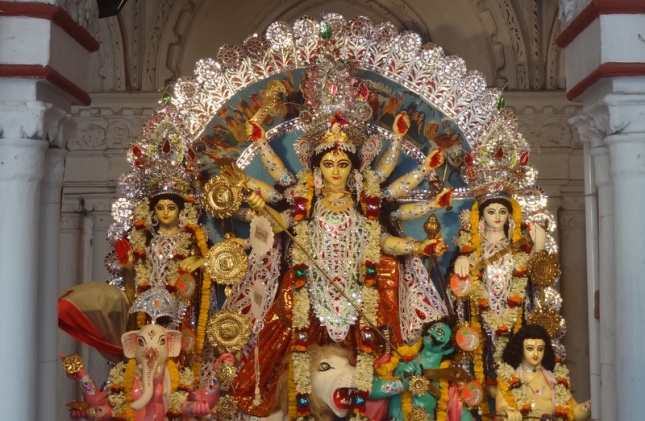 After Rani Rashmoni’s death in 1861, her sons-in-law took to celebrating Durga Puja in their respective premises – presently at SN Banerjee Road (at two houses by descendants of daughter Kumari & Padmamoni and on Rani Rasmoni Road by the descendants of daughter Jagadamba ( who was married to Mathuranath Biswas, illustrious and dependable youngest son in law of Rani Rasmoni.). Still the tradition of celebrating Durga Puja is continuing by their descendants. 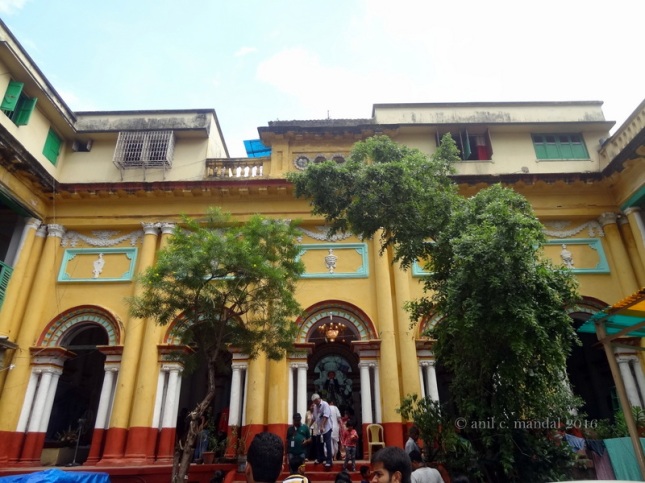 This is the house where the descendants of Rashmoni’s daughter Padmamoni lives and celebrate the Durga Puja. 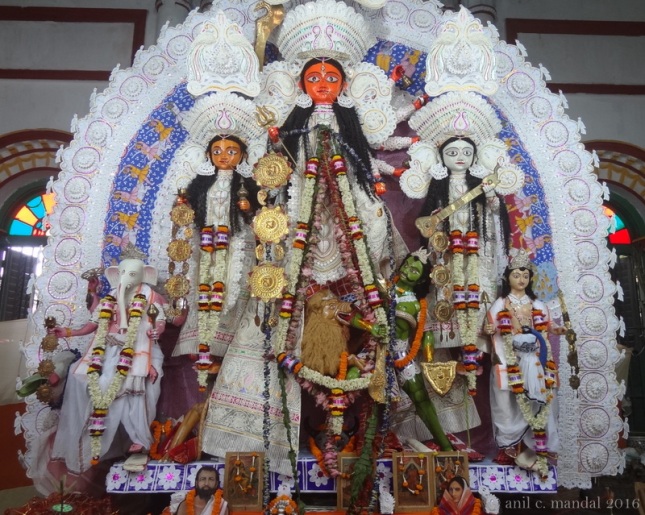 The idol of Durga having a speciality to mention that its face color is “Tapta kanchan” Barna and it is maintained. Ramakrishna and Sarada Devi also worshiped here. Let us walk down to the house of her youngest daughter Jagadamba who was married to Mathuranath Biswas.

Descendants of Mathuranath Biswas and Jagadamba lives in this house at Rani Rashmoni Road and Durga Puja is celebrated by them every year. 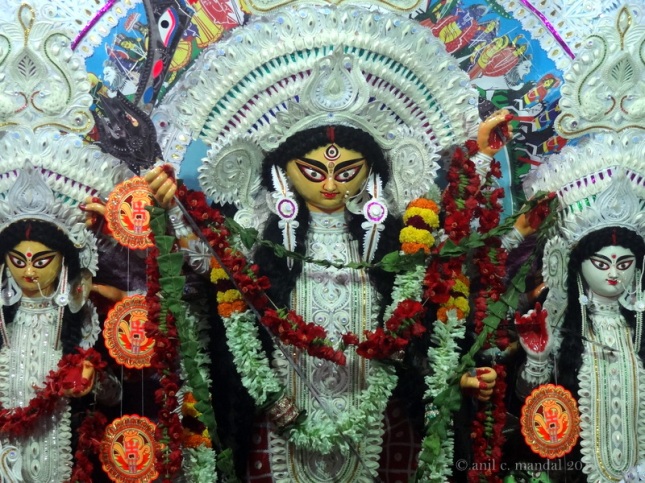 The grand Durga Puja has been celebrated by the successors of Dwarka Nath Dutta since  1855 for 161 years now. The Durga Puja of Dwarika Bhawan is unique with its traditional approach. Here Durga maa is with Shiva.  The decoration of the DurgaDalan, puja rituals are distinct in style. Although,  with the time, the lavishness of puja has faded away a bit, but yet in term of sanctity and devotion, this puja is being top listed among the Banedi Barir Pujo by the viewers.

This puja is held at 12A Shibkrishna Dawn Lane , North Kolkata near Girish Park. Walking towards Rabindra Sarani on Vivekananda Road, this lane originates on your left just after no 24A Vivekananda Road. 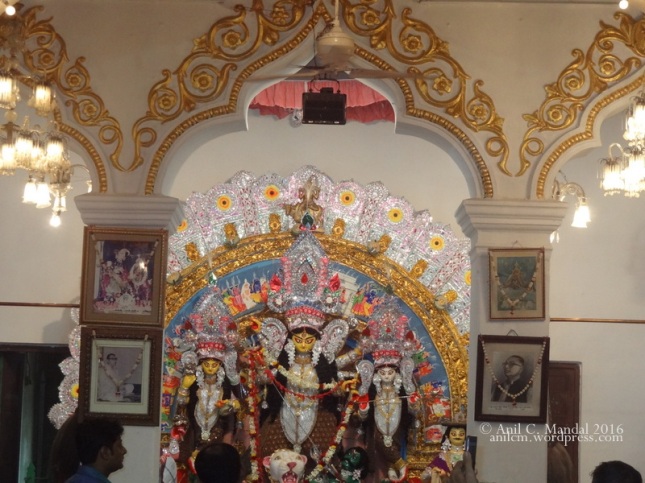 It is said that Maa Durga comes to Daw family first to wear Real Gold jeweleries every year. She comes here to get decorated herself with the Gold ornaments here in Daw house of Jorasank, then she goes else where.

A successful businessman Gokul Chandra Daw (or Dawn in Bengali দাঁ )  of Satgachia came to reside at Jorasanko. Here He adopted Shibkrishna Dutta, his relative’s son as his own. On this occasion, Gokul Chandra Dawn celebrated Durga Puja in 1840, for the first time in Calcutta with deep religious sanctity and purity of rites. That was the beginning. From then the tradition has been carried on by Shibkrishna Dawn and later his descendents till date. Their Thakurdalan and the courtyard is huge and has been shooting venue of many films. It is said that Goddess Durga comes to wear her Jeweleries at the Jorasanko Dawn House. The reason being Gold ornaments in large quantity to decorate the Chalchitra along with Ornaments of diamonds and emeralds were brought from Europe and the same being offered to maa Durga every year for her decoration. 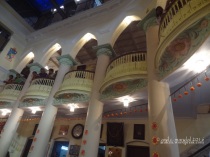 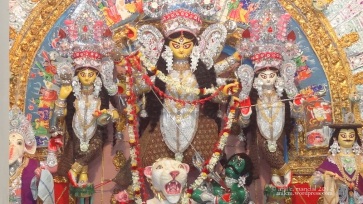 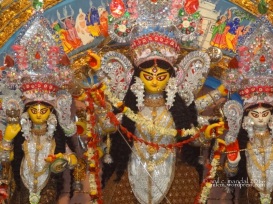 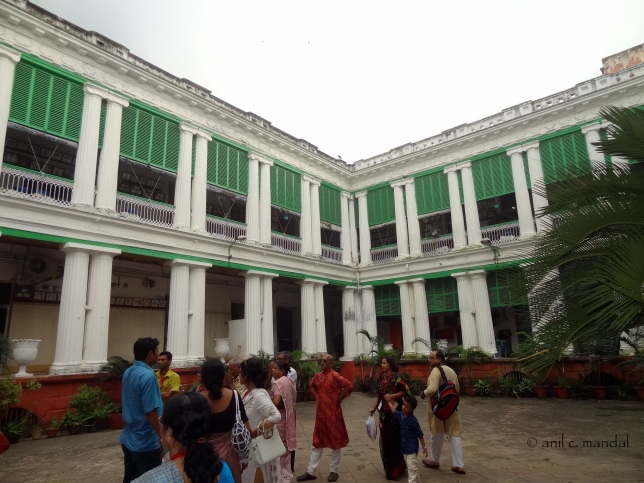 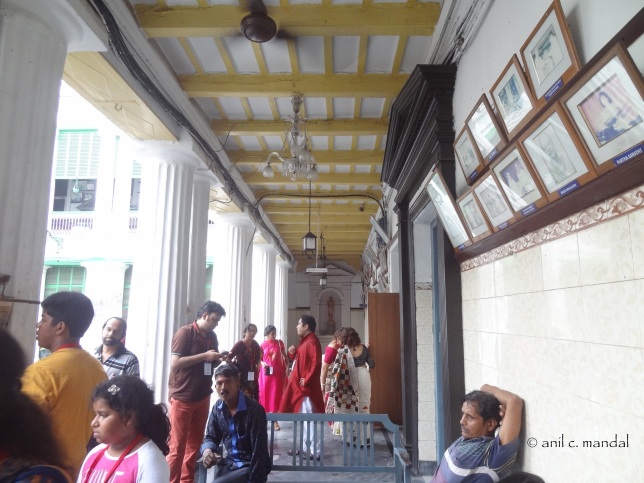 This grand house was designed and constructed by German architecture company, Martin & Burn. Khelat Chandra Ghosh  was a Diwan in Warren Hastings Court, and he was also known as a social reformer.