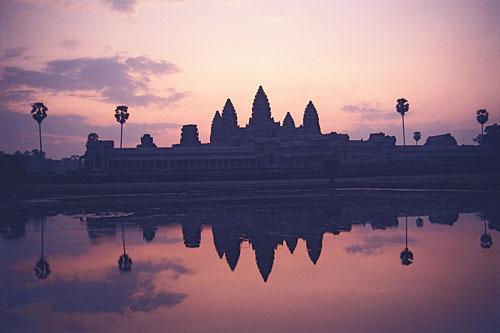 I don’t have much knowledge about History or Geography nor I am a religious man to know about a Great Hindu temple in Cambodia. I was not aware of the Great Hindu Temple “Angkor Wat” in Cambodia. Thanks to Shashi Tharoor for his article “Lets promote the great Indic civilization” in Times of India, dated Oct 21, 2007 wherein he has talked about it and Hindu religion. “Angkor Wat” the magnificent Hindu Temple, a product of Hindus in Cambodia – its a surprise for me to know this, thanks to Shashi Tharoor.

We are casual, ignorant and liberal to our own religion. It is true that in the recent voting for the new seven wonders, most of the Indian irrespective of religion voted for the Taj Mahal constructed by a Mughal Emperor and not for Angkor Wat the most magnificent architectural product of their religion. It is a matter of shame that it has not got the votes of Hindus even. I too have voted with the majority having no knowledge of Angkor Wat. We accepts the things from other religions, other countries, at ease but we never try to promote our own things, own religion.

Angkor Wat, the most famous, the most majestic Hindu temple dedicated to God Vishnu, whose construction was begun at the beginning of the XII th century during the administration of king Suryavarman II. Its construction lasted 37 years. His name means in Khmer ” the city pagoda “. The largest and best-preserved temple to have remained a significant religious centre since its foundation—first Hindu, dedicated to Vishnu, then Buddhist. It has become a symbol of Cambodia, appearing on its national flag.