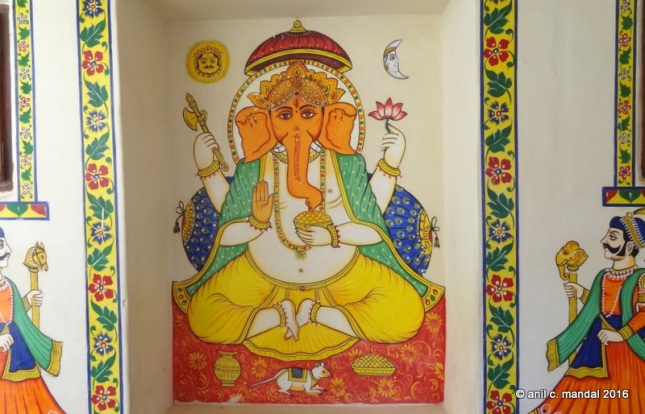 Ganesh is also goes by the names Ganesha, Ganapati and Vinayaka. He is a popular Hindu God in India. Ganesh is easy to recognize by his elephant head and large tummy. It is believed that Ganesh can bring wealth and prosperity. Ganesh is the God who will help you overcome all road blocks you may encounter and help bring success. Thats why he is known as Siddhidata.

In India Ganesh is worshiped by all, rich and poor. Everyone seems to consider him vitally important. In Thailand Buddhists have equally accepted this god and he has become a part of their rich inheritance.

Business people turn to Ganesh before starting a new enterprise. Ganesh is there to assist in financial matters and make sure the wind of wealth blows in their direction.People moving to new places make sure to have Ganesh with them. Ganesh is the god who helps with new beginnings ensuring success.

The image on the wall of the Palace at Udaipur, Rajasthan is not a surprise because the rulers were all Hindu Kings there. They must be worshiping God Ganesh before heading for fighting their enemies on the warfields or  at peace. 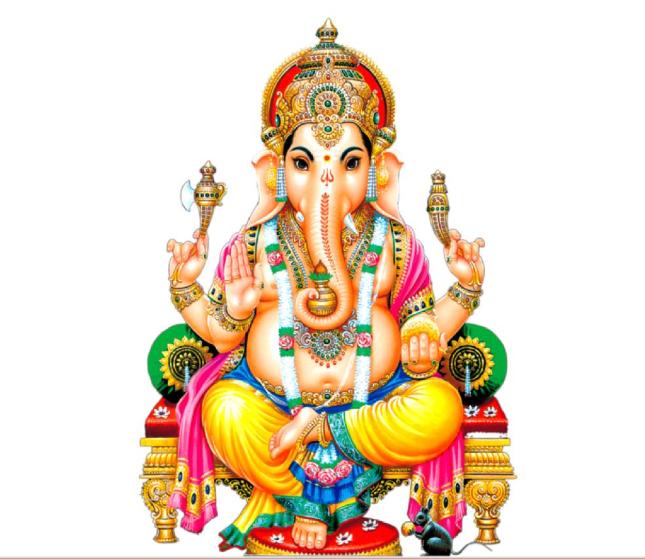 Mistake turned to be a blessing

It is not my story, somebody else’s story I am presenting here. One day a high ranked army Officer was talking to us. He was talking about the God. He believes God or a supreme power ( whatever name you give), is existing. Sometimes some people may experience His existence through some incidents, in own life or in the family through which you may realize about His existence. In this connection he explained his experience, on his own life, which was like this :

“Old habits die-hard.” Once you are habituated to smoking and drinking it is difficult to come out from those habits. That was the case for him. He used to smoke about seven packets of cigarettes in a day and half bottle of wine in the evening daily. One fine morning his doctor detected some type of heart disease and Doctor advised him to stop drinking and smoking. The situation forced him to stop smoking and drinking. Due to medically unfit promotion also stopped.

Treatment was going on. Smoking and drinking totally stopped. Now he was spending the evening with his family. After treatment for an about one year or so, he was again advised to go through all the tests again, which was done a year back while diagnosis of the disease. He went through all tests at various speciality centers. Then the reports were analyzed carefully at various levels as per the Army procedure since it was a case of unfit. It took about a year to declare the report and surprisingly he was declared “fit”. For the Officer it was like a miracle, he never thought of it.

How could it happen? He wanted to know the things, but he was not obliged initially. Nothing was told him though he was a high-ranked Officer but later on his insistence, he was told on one condition. Condition was – he would not go to court for claiming compensation. Most probably he was agreed to. Then he was told that the initial diagnosis itself was wrong.

It was a clear case of compensation because this mistake made him to lose his promotion, seniority; mental peace and then wrong treatment and its side effects. He kept his promise.

During these many months one positive thing happened in his life, which he considered more than any compensation or any monetary gain. He could come out from the bad habits of smoking and drinking. Was he not declared as a heart patient, it was impossible for him to come out from those bad habits, which were killing him silently? One mistake turned the ‘impossible’ to ‘possible’ and saved his life.

He looked at the incident in a different angle. In fact the incident turned him towards spirituality and made him to believe that the mistake was a blessing for him and it was the plan of God, without His wish such things cannot happen.

Without the sacrifice of small interests or gains, you cannot achieve a greater goal in life. Health and happiness in life are the wealthiest and precious than any other materialistic gains.

Napoleon Hill, American speaker and motivational writer said : “Great achievement is usually born of great sacrifice, and is never the result of selfishness.”