Vivekananda Rock Memorial is a popular tourist monument in Vavathurai, Kanyakumari, India. The memorial stands on one of two rocks located about 500 meters east off mainland of Vavathurai, India’s southernmost tip. It was built in 1970 in honour of Swami Vivekananda who is said to have attained enlightenment on the rock. According to local legends, it was on this rock that Goddess Kumari performed austerity. A meditation hall (Dhyana Mandapam) is also attached to the memorial for visitors to meditate. The design of the mandapa incorporates different styles of temple architecture from all over India. It houses a statue of Vivekananda, made by renowned sculptor Sitaram S. Arte . The rocks are surrounded by the Laccadive Sea. The memorial consists of two main structures, the Vivekananda Mandapam and the Shripada Mandapam. 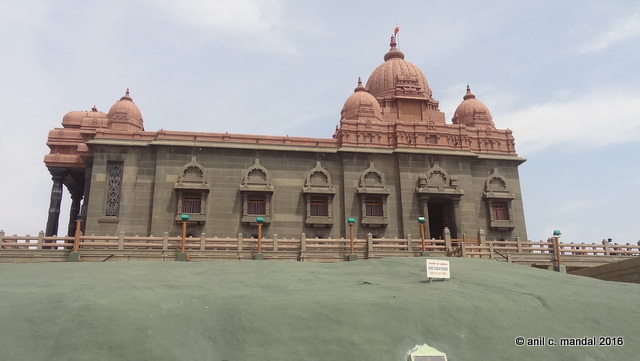 Side view of the monument 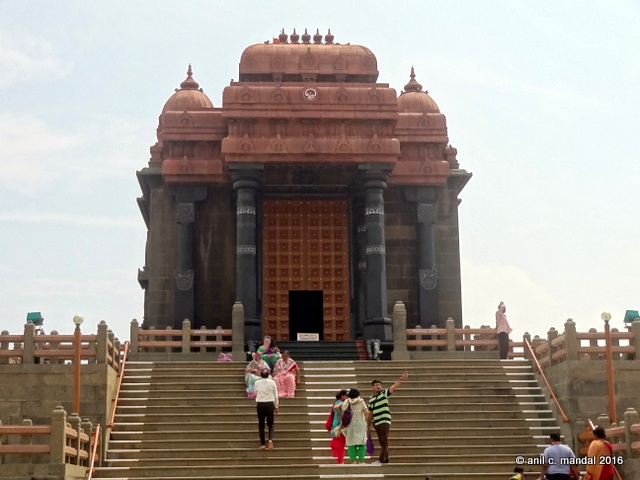 Entrance to the Mandapam 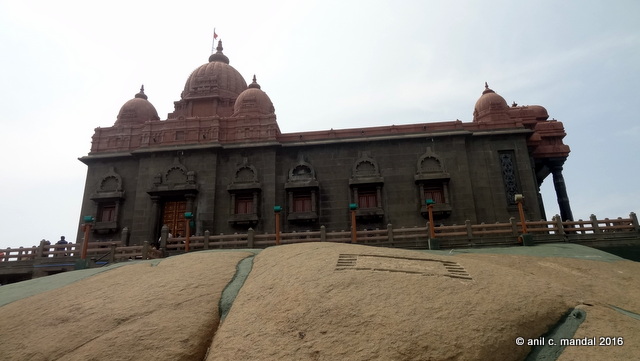 Side view of the monument

view of the Kanyakumari shore 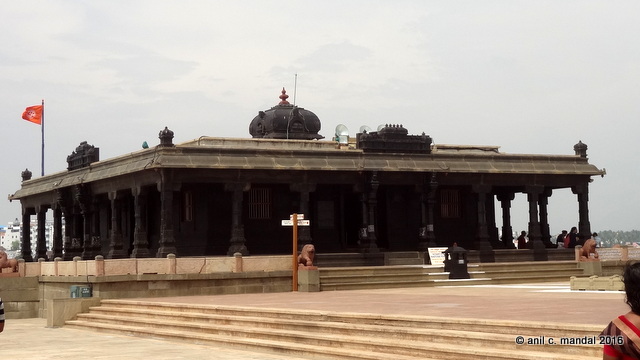 Shripada Mandapam (above) which is a shrine erected at the spot where the footprint of the Virgin Goddess ( Devi Kanya Kumari ) is seen on the rock. However the Devi Kumari Temple temple is located on the main land of Cape Kanya Kumari in Tamil Nadu.

Devi Kanya Kumari, is in the form of an adolescent girl child. Devi is popularly known as “Bhagavati”, “Durga” or Parvati”. The Bhagavati Temple is located in Cape Kanya Kumari in Tamil Nadu; the southern tip of main land India, there by located on the confluence of the Bay of Bengal, the Arabian Sea and the Indian Ocean. She is also known by several other names, including Kanya Devi and Devi Kumari. She is also worshiped as Shree Bhadrakali by devotees. Sage Parashurama is said to have performed the consecration of the temple.

There is Ferry service between main land and the Rock Memorial for the thousands of visitors visiting everyday. It is said that Vivekananda crossed this distance by swimming alone to meditate on the rock.

The worship of Devi Kanya Kumari dates back to the Vedic times. She has been mentioned in Ramayana, Mahabharata.

As directed by his Guru Sri Ramakrishna Paramahamsa, Swami Vivekananda, came here to seek Devi’s blessing in December 1892, as devi is the goddess of Sanyasa. It is in this location he decided to embark on the Missionary Work to a higher level of action rather than being passive like the usual Sanyasis.

Vivekananda (Narendranath Datta) was an Indian Hindu Monk a chief disciple of the 19th-century Indian mystic Ramakrishna. He was a key figure in the introduction of the Indian philosophies of Vedanta and Yoga to the Western world and is credited with raising interfaith awareness, bringing Hinduism to the status of a major world religion during the late 19th century. He was a major force in the revival of Hinduism in India, and contributed to the concept of nationalism in colonial India. Vivekananda founded the Ramakrishna Math and the Ramakrishna Mission. He is perhaps best known for his speech which began, “Sisters and brothers of America …,” in which he introduced Hinduism at the Parliament of the World’s Religions in Chicago in 1893.  (Source : wikipedia)