Bill Gates is, in a manner of speaking, flushing his money down the toilet. His charitable organisation, the Bill & Melinda Gates Foundation, is looking for future loos that can improve sanitation around the world.At the Reinvent the Toilet fair, hosted at its Seattle campus this week, designs included a lavatory that used microwave energy to turn poo into electricity.

Another turned excrement into charcoal, while a third used urine for flushing. In total 28 designs were shown off at the fair and the winner was a team from the California Institute of Technology. Led by Prof Michael Hoffman, the toilet they designed was solar-powered and generated hydrogen gas and electricity. They won a $100,000 prize. “We couldn’t be happier with the response that we’ve gotten,” Bill Gates said at the event. 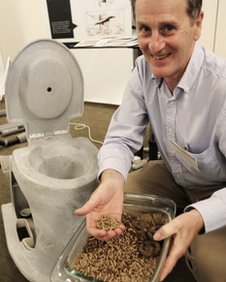 The project challenged inventors to come up with a toilet that…